Lumbinī (Nepali and Sanskrit: लुम्बिनी ) is a Buddhist pilgrimage site in the Rupandehi District of Province No. 5 in Nepal. It is the place where, according to Buddhist tradition, Queen Mayadevi gave birth to Siddhartha Gautama in 563 BCE.[1][2] Gautama, who achieved Enlightenment sometime around 528 BCE, became the Buddha and founded Buddhism.[5][6][7] Lumbini is one of many magnets for pilgrimage that sprang up in places pivotal to the life of the Buddha.

The Ashoka inscription on the pillar. 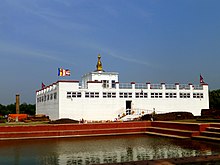 Lumbini has a number of temples, including the Mayadevi Temple and several others which are still under repair. Many monuments, monasteries and a museum, the Lumbini International Research Institute, are also within the holy site. Also there is the Puskarini, or Holy Pond, where the Buddha’s mother took the ritual dip prior to his birth and where he had his first bath. At other sites near Lumbini, earlier Buddhas were, according to tradition, born, then achieved ultimate Enlightenment and finally relinquished their earthly forms.

Lumbini was made a World Heritage Site status by UNESCO in 1997.

Lumbini, birthplace of Gautam Siddhartha, the prince who became the Buddha Sakyamuni, is one of the four central holy places of Buddhism. Located in modern Rummindei, Nepal, in the Himalayan foothills, the Lumbini of the Buddha’s day was an elegant garden named for Lumbini, the mother of Queen Maya. Here Queen Maya, stopping to rest on the journey from Kapilvastu to her parent’s home in Devdaha, felt the signs of impending birth. Reaching out, she grasped a branch of plaksa tree with her right hand and the Bodhisattva, the future Buddha, emerged from her right side. Brahma, Lord of Brahmaloka, the highest heaven, together with an assembly of gods from the heavenly realms came to witness this momentous event. Sakra, Lord of the Trayastrimsa Heaven, received the child into his arms and lowered him gently to earth. Lotuses arose under the child’s feet as he took seven steps in the four directions, proclaimed his purpose, then stood still while the naga kings Nanda and Upananda showered him with warm and cool streams of water. The Lalitavistara-sutra describes the miracles that attended the Great Being’s birth.

If you like to travel Lumbini to witness of birthplace of Gautam Buddha, We can arrange the your trip with our Nepal trip which is include Pokhara, Kathmandu and Lumbini. You can contact us for this trip or directly mail in bidur@nepalpowerplaces.com.