Helambu is a region of highland villages in Nepal, about 80 km from Kathmandu. It is the home of the Hyolmo people. The word Helambu derives from the word Hyolmo. The Helambu region begins at the Lauribina La pass and descends to the Melamchi valley. Helambu is famous for its sweet apples and artistic Buddhist monasteries and it is a Buddhist pilgrimage site.

Several trekking routes visit Helambu, one of them being known as Helambu Trek. 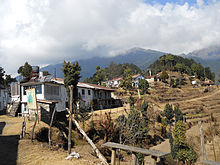 This is a good trek for people who don’t have much time in Nepal. It is an 8-day long trek which starts in Kathmandu itself, but can be completed in as little as 5–6 days. The normal trailhead starts off at Sundarijal and goes past Chisopani,Hyolmo, Kutumsang, Magin Goth, Tharepati, Malemchigaun, Nakote and Hyolmo, Tarke Gyang. After which you have the option of two roads one is the footpath via Sermathang or the bus route via Kiul Takpa Kharka. Kashye Both ways ultimately meet at Melemchi where you can take a bus back to Kathmandu. Another variation is the reverse of this trek. The maximum height reached during the trek is about 3650m.

The trek starts from Sundarijal (1,390 m (4,560 ft)), a small dam and hydroelectric station in the north-east corner of Kathmandu Valley where the Himalayan Rescue Dog squad is headquartered. The trails begins west of Sundarijal at the end of the auto road where the large water pipe comes out of the hills. there is now bus service to Sundarijal from Boudhanath. A taxi can also be hired or you can walk. There is now daily jeep service from Sundarijal to Pati Bhanjyang. To walk begin at the bus park in Sundarijal and the large water pipe. Cross under the pipe and proceed along its west side much of the way is upstairs, continue. eventually turning left to cross over the dam of a water reservoir (1,585 m (5,200 ft)) in 40 MINUTES, Across the dam continues uphill crossing the watershed management road which winds around the hillside There is Lodge near here. Climb through wet subtropical forest to an oak forest and on to MULKHARKHA (6220FT 1896M), in an hour, This IS a scattered TAMANG village with lodges and view of KATHMANDU Valley behind you Don’t walk the next area alone, as there been rare instances of attacks north of MULKHARKHA AND Take care of your belongings_ but you know that any way. The trail continue up, first in open country and then in oak forest., often in small gully, and enters shivpuri watershed and wild life Research area,after passing an army station. The trails ascends to a pass Burlang Bhanjyang(8000ft2438m) with houses and lodges and below it on the north side in 2 hours This pass marks the Shiv puri ridges Kathmandu Valley,s rim The trails descends through a pleasant oak forest, past some house and lodge on the left, Chisapani (7200ft, 2194m),[3] meaning ‘’cold water’’, to a flat portion where another trail joins from the right and a road crosses Ina clear weather there are good view of the Himalaya to the north and in the spring rhododendrons bloom, The trails continues to descend through open farmland to reach PATI BHANJYANG (5800 ft 1768m), sitting in a saddle 13/4 hours from the Burlung Bhanjyang, There are lodges and police check post here From here there are two routes. One continues along the general ridge system heading north and eventually descend east to the Sherpa village of Melamchi Ghyanng, The other heads east, descends to the Melamchi Khola and proceeds up its east(left) bank towards Tarke Ghyang, situated opposite Melamchighyang on the east side of river. the ridge route goes much higher (almost to 3,700 m (12,000 ft)) than the other route and other may be snow on its upper portions in the late winter or early spring. There are no permanent villages between Khutumsang and Melamchi Ghyang on this route, but leaving Khutumsang in the morning reach tharepati, where there are lodges.that afternoon. this is the part of the route offers the excellent views of the mountains. If it clouds over, as often happens late in day.,consider spending a night up high in a seasonal lodge or hopping for views intharepati, then hope for good views of the next morning. The circuit to the north along the ridge and the return via the east side of the Melamchi Khola Valley is described but if their weather is bad it is wise to head up the east side of the Melamchi Khola and then condition have improved to return via the high route In this case we follow the direction in reverse.